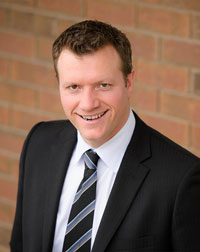 Kevin Bolibruck is a natural born motivator and leader, be it on the ice, in his community or as a mentor and coach to business people and athletes. His consistent drive to self-improve has taken him from success in junior, league and international hockey in North America and Europe, during which he also attained his MBA, through to quickly growing a highly regarded financial services practice. His C.A.N.I (Constant & Never Ending Improvement) attitude stemmed from a difficult early life that continued in the push and grind of competitive hockey. However this mental toughness enabled him to enjoy 5 Championships in 4 different leagues, most recently as part of the Real McCoys, Allan Cup win in 2014. Since officially retiring from full time hockey in 2011 Kevin has pursued a business career with equal application and success, quickly establishing a thriving financial services practice in Fonthill, ON. He now is also applying his many life and business lessons to the VIKTRE mentoring program. He particularly enjoys helping junior and transitioning athletes to appreciate the need for balance and focus, and is passionate about sharing his own philosophy of LIFE – Living Intentionally For Excellence! His strong belief in philanthropy and connection to community has seen him involved in a number of causes including achieving $400,000+ raised in a month for one local church. He is now Chairman of the charity Your Life Counts, an organization encouraging youth and families to nurture, protect and sustain their will to live, where he has been part of the YLC Alliance.